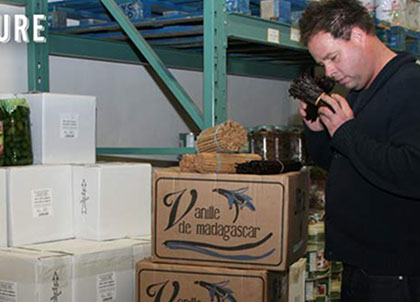 QUALITY PRODUCTS FROM AROUND THE WORLD
However sustainable we want our restaurant, tapas bar or bistro to be, the purchase of foreign specialities from countries such as Italy, Spain, France or, for example, from the Maghreb is inescapable. Import is then inevitable. Vanilla Venture are specialists in importing delicacies from around the world. A conversation with Director Gerard Jansen:

I founded Vanilla Venture together with my brother Peter in 1995. At that time our parents lived in Kenya and during one holiday to visit them we ended up on the island of Madagascar; a countryside island with a unique biotope and the most exceptional flora and fauna. And it was there, at the local market, that we discovered the most beautiful vanilla we had ever seen. It looked unlike anything we’d ever seen, and nothing like the dried-out sticks you find here in the supermarket… "

IN THE BEGINNING ...
"Vanilla", Gerard continues, "is not Madagascar's most important export product (including by soft drink producer Coca-Cola) by coincidence. The Madagascan climate is perfect for the harvest and fermentation of the fruit, or pod, of the climbing orchid from which vanilla grows. But it soon transpired that even just exploringthe idea of exporting this beautiful vanilla was a huge and complex undertaking. By this point it was 1994. Our first step was to obsessively research our subject and we wrote down all the exporters operating in the capital Antananarivo. The strangest thing initially was that our presence was largely ignored! Madagascar’s vanilla trade was already flourishing and we found we were ‘party number 326’ i.e. a drop in the ocean of keen exporters. The vanilla trade, it seemed, was a tight-knit and very closed world. But we didn’t give up. Over time and with the help of the Dutch consul, we were eventually able to export samples to The Netherlands and place our first order. A buyer in Madagascar taught us what to look out for, for example- the longer the fruit, the better, and we learned surprising facts – such as that vanilla can sometimes appear completely white in colour. This doesn’t mean anything’s wrong with it, in fact, it’s a good sign. The white pods are often nick-named 'givre' or ‘ripe’ in French. 'Vanilla givrée' usually has downy, crystallized vanillin on the outside. This is sometimes imitated in the synthetic vanillin trade. But we’re aware of that.”

GOURMET QUALITY
Gerard Jansen: "Most vanilla nowadays comes from Indonesia and increasingly from China and India. "But we’re always looking for gourmet quality, because we only work with the best. When Madagascan vanilla is harvested in June, the long fruits are gently blanched and the fermentation process begins. Then it should be dried well, but not for too long. The whole process takes between 1 - 10 months. What’s harvested at the beginning of the year arrives at the sales channels at the end of the year. In the testing phase, we always look out for the presence of phenolic scent, for example. This is something that’s best avoided because it has a tendency to overpower other flavours. We buy superb quality batches, once a year. "
So the two brothers had Super Vanilla on their hands, but no buyers yet. However, with his hotel school background, Gerard had a host of contacts in the hospitality industry. In one felled swoop he got the famous Dutch Patisserie Holtkamp and chef Robert Kranenborg, who then worked at restaurant La Rive in the Amsterdam Amstel Hotel, enthusiastic about the quality of their vanilla. This gave their new venture the kick-start it needed. They opened up an outlet, first in the heart of Amsterdam on the corner of Ceintuurbaan and the Ruysdaelkade, where red-light girls were their unexpected neighbours, before expanding into a larger space at Contactweg in Amsterdam West where they are located today.

AN EXPANDING RANGE
Jansen: "Our range has grown enormously over the years. Besides vanilla, we supply, for example, the Spanish Joselito hams and the lesser known Cecina de Léon, a beautiful ham taken from a well-fed cow's leg! Take a stroll around the aisles of our warehouse, and you can encounter dozens of types of salt, rice for paella, risotto, different types of olive oil from various countries (including the oil of Armando Manni and Massimo Bottura), perfect foie gras from Nivo Finess in Belgium, beautiful fruit juices from the German company Van Nahmen, and the 100% animal-friendly Eduardo Sousa Spanish foie gras. Olives, canned tuna by the specialists Ortiz, ripened cheeses by Michel van Tricht, beautiful aromatic truffles from Italy, sausages, soft drinks by Fever-Tree, accompanying gins, an array of vinegars, fragrant fennel sticks and quality mozzarella from Casa Madaio in Campania. Furthermore, special spices such as vadouvan, sumac (an acid red powder that can act as a dry vinegar substitute), piment d'espelette from the French Basque country, saffron, chorizo ​​from Rioja, all kinds of curry powders, capers and oregano from the islet of Pantelleria. But also, for example, condiments such as colatura di alici, the lard of salted sardines in wooden barrels, and so on… In total we have around 1600 products in stock. All geared towards refinement. All products with a story, because that’s what’s important in this day and age"

RESEARCH
Peter Jansen is responsible for the culinary research, the ‘search’ work. He says: "The trick is to find the products that lead you back to other products from the same supplier. Take for example Mattia Pariani. An Italian who makes incredibly beautiful oil and pasta from Piedmontese hazelnuts, pistachio’s and pine nuts. Such delicious products are hard to find in their own right! But after making enquiries, we discovered their authentic chocolate spread made using their special hazelnuts ... completely delicious! Just one taste and you’ll never look back. But you have to experience it to know it. This is what we have made our profession.

Our "SNOEPWINKEL” or “Confectionery” is for chefs and private individuals and has been open since 2015, but only online as a web-shop. Why? Gerard: "We get a lot of requests from private individuals to supply small quantities of certain products. Even hobby chefs want to work with the best ingredients. So now we keep around 200 products in our online shop for these customers to enjoy. Order before 12 o'clock and receive your products the next day. Or if you really can’t wait, Maarten van Caulil and De Leeuw butcher shop, both in Amsterdam, stock a selection of our products.

"What will Vanilla Venture look like in five years? Gerard: "I would hope we have further established ourselves internationally. We are already supplying companies in the Caribbean, Thailand, the Maldives, Dubai and Germany. I think we can build on that."

Vanilla Venture strives to be the best delicatessen wholesaler in the Netherlands,  making a valuable and ongoing contribution to the success of its customers.